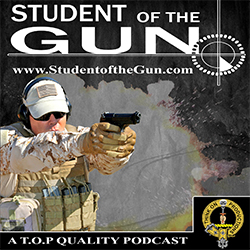 Biloxi, Mississippi (Ammoland) Gun culture pundits and followers are preemptively celebrating National Concealed Carry reciprocity based upon the assumption that the Supreme Court will be forced to acknowledge it after their Gay Marriage decision. Before you pop the cork on the champagne you might consider a few facts.

Our SWAT Fuel Warrior of the Week wants to discuss belts for concealed carry and carrying spare ammunition. Professor Paul shares a personal experience and his opinion based upon year of gun carrying.

Student of the Gun Radio airs every Monday through Thursday  at 9 a.m. EST and can be found by going directly to www.StudentoftheGunRadio.com. Those using mobile devices can follow us with iTunes or Stitcher.

SOTG Radio is a Think On! production. Student of the Gun is the #1 source for education, enjoyment and enlightenment of real-world firearms including: training, videos, radio, books and articles. A beginner once, a student for life.

Each episode will introduce the viewer to new and interesting firearms as well as the latest gear to go with them. We will travel throughout the United States, seeking the advice and expertise of the best firearms trainers available.

Sometimes deadly serious, sometimes just for fun, Student of the Gun will always strive to educate and entertain our viewers while offering them an insiders’ look at the worlds of firearms.