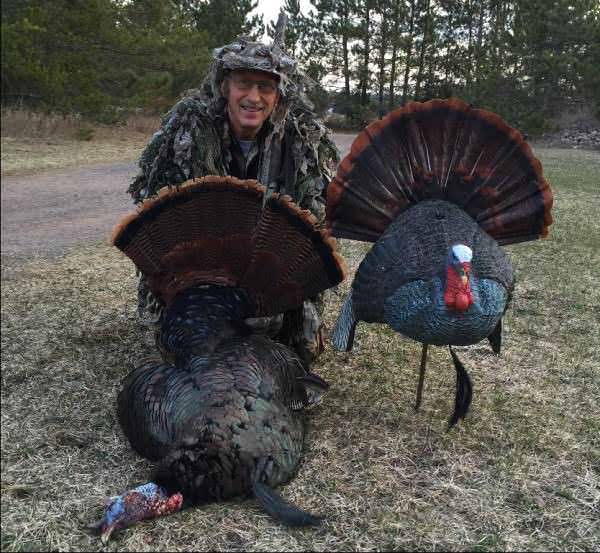 Arizona – -(Ammoland.com)- My brother, who is a superb hunter, tried out a new turkey technique this morning.  I got his call at 8:30.

Turkey populations in Wisconsin have boomed in the last 15 years.  There were none in the state when I was growing up in the 60’s.   When I was taking care of my mother, I saw a flock of two dozen of them wander about the house.  The property borders the St Croix/Namekagon wild river national park.  I recall reading articles about how hard wild turkeys were to hunt, but my brother has had excellent success.

This year he decided to try a technique he had seen on YouTube.  With this technique.  The video shows how effective a strutting gobbler decoy can be.

Early this morning, on April 14, 2016, he was out in full gillie suit, with his Bennelli and the full strut decoy that he had purchased on sale (half price, our family tends to frugality).  The gillie suit is the most effective camouflage that he has used. See the item coming out of his hat on the right? That is the end of barrel of his Bennelli 12 gauge.  If you look a little closer, you can see the forend above the turkey’s tail and to his right of his chin; to the right of that is the black sling.

He started the hunt in a mixed woods and open area with a traditional call.  A large tom came off the roost from behind him, flew over his head, and disappeared into the trees before he could get a shot off.  Turkeys are some of the largest flying birds.  When they pass close by you in flight, they make an impression!

He was not able to entice that gobbler in by calling, so he traveled about 3/4 of a mile away, where he had seen turkeys earlier.  It was a field forested on two sides, farmed by a neighbor in his 90’s.  Lyle goes to my Brother’s church and is related through marriage.  As he approached the field, he saw a large tom and three hens out in the open.  It was the perfect opportunity to attempt the strutting tom decoy technique.

Taking advantage of the woodline and a slight rise in the ground, he belly crawled in the gillie suit, pushing the strutting decoy in front of him, to within 120 yards of the tom and hens.  He could now see the turkeys, and they could see the decoy.

It did not take long.  The tom saw the decoy and charged right at it.  My brother said that he was worried that the bird would run right up to him; but it stopped 10 yards out and went into full display mode.  10 yards is a bit close for a tight choked turkey shotgun, but at the shot, the tom went down instantly.  It was a beautiful bird and trophy.  It weight 25 pounds, with a 9 inch beard.

You have to apply for a permit to hunt turkeys in Wisconsin, but the birds are plentiful in many areas.  In some, they have become pests.  The weather is important for a successful hunt.  During the youth hunt a few days before, the weather was unseasonably cold, down to single digits.  That effective shut down the turkeys and turkey hunting.

Yesterday it warmed up to the 40’s, and today was perfect weather.  The turkeys were out in force, and made for a perfect and memorable hunt.

©2016 by Dean Weingarten: Permission to share is granted when this notice is included.
Link to Gun Watch