(Editors Note: Global Security Marketing is no longer in business  we have left this article active for anyone that is still using the TAS Ballistics Calculator.) 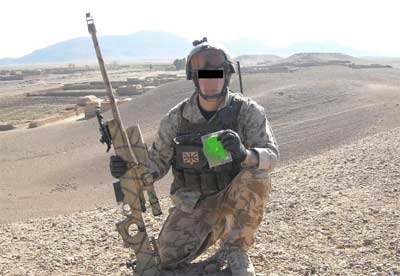 England – -(AmmoLand.com)- Long-range rifle shooting doesn't get much more demanding than F Class, with its half MOA V bull – just five inches in diameter at 1000 yards. Taking your rifle out of the slip, setting-up, assessing the wind, making that vital scope adjustment then squeezing off the first round is always a bit of a ‘shot in the dark' for me – desperately hoping that the first sighter is at least on target, otherwise your whole shoot could be compromised. My home club gives out a special key-ring for first shot hits in the V bull – we don't give out many!

Of course, F Class is just a bit of fun and shooting does indeed get a lot more demanding  – ask any soldier or police firearms officer. Often, one shot is all they will get – no sighters, no wind-flags, no butt-crew spotting your fall of shot.

Even though we have our sight-settings from last time we shot, our ammunition is identical and we know the range, why is that first shot always a gamble? What could possibly go wrong? The answer? Plenty!

How many external forces influence our shot? Gravity and the wind are the obvious ones and the most influential. It doesn't take much to blow a bullet several feet at 1000 yards. What else? Temperature of course. Temperature affects velocity and thus elevation. In the UK we are lucky in that we don't get massive temperature shifts from summer to winter but sufficient to make a difference of maybe 5 or 6 MOA  – enough to have your shot go over the top of the target.

There are a few other things as well – humidity for example. Difficult to measure so difficult to allow for. Elevation (above sea level) is another and of course the angle you shoot at, though this doesn't become significant until we get to serious uphill or downhill shots, which we are unlikely to encounter on formal ranges. We also have a few other influences which will contribute to your frustration in attempting to hit that five-inch V bull at 1000 yards. If you have a right-hand barrel-twist, a wind from the left will tend to lower the impact point and conversely, a wind from the right will lift the shot.

Most of us now have access to ballistic software and these computer programmes can be very useful, especially if you have a new rifle. Providing you know the muzzle velocity, the bullet's BC and the wind strength and direction, any half-decent programme should get you on target even at 1000 yards. Trouble is, our computer isn't on the firing-point, it's usually at home. Yes, you may be lucky to own one of those dinky palm-tops and if you load it up with a good programme you can input many of the aforementioned factors and make that first shot a bit less of a gamble.

For the professional shooter, like the military sniper, such devices are available but if electronics are involved, moisture will inevitably be a problem or even sand and of course it's fragile. What would we give for a device which was portable, robust, weatherproof and would give us all this information and not rely on battery power?

Amazingly, I have such a device in my hand at this very moment. I'm about to shoot my 22 Dasher at 900 yards – something I've never done before. I normally use it out to 600 yards but today we are a good bit further back. I've just taken the air-temperature (51 degrees F) and wind-speed (13 mph) with my Kestrel meter and made a good stab at the wind direction – about 30 degrees over my right shoulder. I'm 1000 feet above sea level and I'm shooting up-hill about three degrees.

I need to wind-on 19.2 MOA according to my TAS calculator and my wind adjustment, for a 13 mph wind at 30 degrees is worth a tad over 4 MOA. No adjustments are needed for inclination but it's ten degrees colder than my ‘zero' data, so I need to add 4 MOA. Let's take the shot.

It would be a miracle if I had hit the V bull but it's a good solid hit and I'm quite impressed. No batteries, no wires, no phone, nothing to get wet, frozen, baked or broken in the TAS. Can you believe it?

You want one? Sorry, it would be no good to you because this one is specifically made for me – or at least my rifle – my Stiller Predator chambered in 22 Dasher. It's based on an 80 grain bullet with a BC of 0.420 and muzzle velocity of 3250 fps. This data was collected at 60 degrees Fahrenheit by Dougie Lorimer of Tactical Adjustment Systems (TAS) by chronographing my ammunition. In other words, it's tailor-made for one rifle/cartridge combination and this is what separates the TAS from other such devices. The TAS is dedicated to your rifle and ammo – full stop.

Yes, you could input all the same information into any ballistics computer programme and print off a few sheets of paper. You could even laminate that paper to weatherproof it and stuff it in your gun-bag. The TAS calculator is nothing more but it is offered as a very neat and very robust package about the size of a CD which will slip into your pocket. It's made from a very tough plastic – polycarbonate – that looks as if it would stop a bullet! OK, maybe not but you get the picture. It would certainly stand up to police or military use in any climate.

All your ballistic information is engraved on this plastic disc. The engraving is deep so it won't wear or rub off. You can take it apart in seconds if you have to. You can wash it if you need to. You can have a disc dedicated to each of your rifles or, if you are a military or police user, one disc would serve several identical rifles using the same ammunition.

I have no idea what the British Army sniper uses to make sight-adjustments for his long shots but it can't be better than this and it certainly can't be more reliable, robust or quick and simple to use. I would hope that our guys have at least something as good. Similarly, every police force should issuing a TAS to its tactical rifle shooters – lives could depend on it. These guys aren't punching holes in paper!

I have no idea what the British Army sniper uses to make sight-adjustments for his long shots but it can't be better than this and it certainly can't be more reliable, robust or quick and simple to use. I would hope that our guys have at least something as good. Similarly, every police force should issuing a TAS to its tactical rifle shooters – lives could depend on it. These guys aren't punching holes in paper!

I came across the TAS by accident. I happened to be in the right place at the right time and I assumed that as this was a police/military spec. unit that it would be totally out of the price-range of a civilian shooter. I couldn't have been more wrong. The unit, with a dedicated disc for your own rifle and ammunition is a paltry £95 plus VAT. If you want other discs dedicated to your other rifles, they are just £35 each.

When you compare this to some of the ballistic software on sale, there is no comparison. Yes, it's nice to play with the software on your computer in the comfort of your home but honestly, how much use is it out in the field? The TAS is with you at all times – there to use, to give you the essential information that you need to make that first shot count. For the stalker/hunter, who often needs to take those up or downhill shots, it will not only help you make your kill but make a clean kill more likely.

Have a look at the TAS website on www.globalsecuritymarketing.com and if shooting is your job or your passion then you owe it to yourself to have a closer look at this innovative device.