‘Republicans’ Like Scaramucci Will Drive Gun Owners Out of Party

U.S.A. – -(Ammoland.com)- “Trump has the White House communications staff using Trump-compliant media organs to go after Scaramucci,” insufferable neocon “Never Trumper” Bill Kristol tweeted Tuesday. “Trump senses that a high-profile defector who’s willing to say he was wrong and who can fight back when attacked is particularly dangerous.”

I’m hardly “Trump-compliant,” being a frequent critic of the president’s multiple shortcomings on the right of the people to keep and bear arms.  That said, I’ve long considered the repellant Kristol, who advocates that the “‘lazy’ white working class should be replaced by ‘new Americans’,” to be every bit the enemy as the most base of Democrats. Perhaps more so because he still carries the mantle within DSM circles of being a “conservative.” And I’ll tell you flat out, Anthony Scaramucci represents all that’s intolerable about the Republican party and the misleading poll-based direction of betrayal on guns many in its “leadership” are gravitating toward.

Scaramucci has been on a tear of late, savaging the boss he once publicly sucked up to who fired him after only 11 days on the job as White House Communications Director. Naturally, Democrat-sympathizing outfits like Vanity Fair are overjoyed to dish up all the dirt he cares to give them.

His goal, after you get through all the ad hominem attacks, is to “primary” the president, and what he says about that is revealing:

That’s it. It’s not that “Republican” Weld was a politically opportunistic gun-grabbing liar when governor, the equivalent of a Feinstein or a Schumer, turning coat and breaking campaign promises. It's not that Weld endorsed semi-auto and magazine bans, waiting periods and barring handgun sales to citizens old enough to vote and serve in the military. It’s that he lacks “panache.”

“Conservative” Scaramucci being a dope when it comes to the Second Amendment should surprise absolutely no one who looks at his past treatment of it. Case in point, an ABC News report about Scaramucci deleting tweets from his Twitter account produced these two attitude revelations: 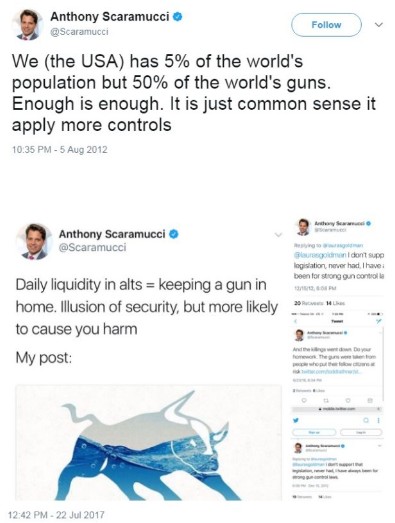 This is the kind of gun-grabbing Republican we’ll get if we listen to the “moderates.” This is the kind of Republican who considers due-process-eviscerating and confiscation-enabling “red flag laws” and “universal background checks” good first steps before they really let us know how they feel about guns in the hands of anyone they don’t control.

What gun owners need to ask themselves is what kind of Republican Trump will be if he doesn’t pull back from the infringements. The “bump stock” Intolerable Act could have been a fatal political miscalculation, except even most gun owners haven’t figured out the issue isn’t about such devices at all, but abuse of executive powers to dictate disarmament edicts. That door opens for future Oval Office occupants, be they Democrats or swamp Republicans, and Kamala Harris, for one, is already licking her chops.

For gun voters, 2020 is still the president’s to blow, and it looks like he and others in the GOP “leadership” may be getting ready to do just that. Assuming they don’t, and the smoke clears after the election with talking head pundits once more gnashing their teeth, there’s one other prospect gun owners ignore at their peril:  Once Trump is in for a second term and reelection is no longer a concern, what’s our “Plan B” if he decides it can’t hurt him to show his true colors on guns, and that his legacy plans have nothing to do with what he pledged to cheering NRA members?

David Codrea is the winner of multiple journalist awards for investigating/defending the RKBA and a long-time gun owner rights advocate who defiantly challenges the folly of citizen disarmament. He blogs at “The War on Guns: Notes from the Resistance,” is a regularly featured contributor to Firearms News, and posts on Twitter: @dcodrea and Facebook.