Record Number of Background Checks for Gun Sales In November

Background Checks On Gun Sales the Most Ever In November 2008 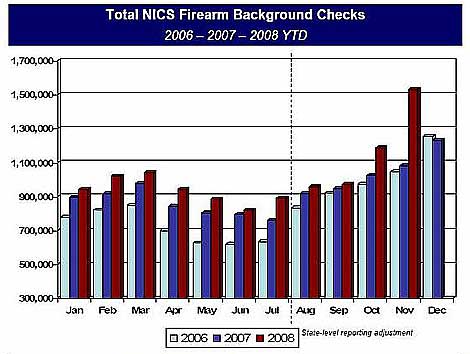 Background Checks On Gun Sales Most Ever In November 2008

NCIS – -(AmmoLand.com)- Background checks on the sale of firearms reached record levels during the month of November, pointing to a spike in sales for the month.

Data from the FBI's National Instant Criminal Background Check System (NICS) show a 42 percent increase in November firearm purchaser background checks. A total of 1,529,635 checks — the highest monthly total ever — were reported for the month, up from 1,079,923 in November 2007.

Federal law requires FBI background checks on individuals purchasing firearms from federally licensed retailers. The NICS increase coincides with an increase in federal excise taxes reported by firearms and ammunition manufacturers, another key economic indicator for the firearms industry. Trends such as excise taxes and NICS data are strong indicators of sales patterns; however, they are not actual sales.

There is no data source that captures firearms sales by month.

The post Record Number of Background Checks for Gun Sales In November appeared first on AmmoLand.com.