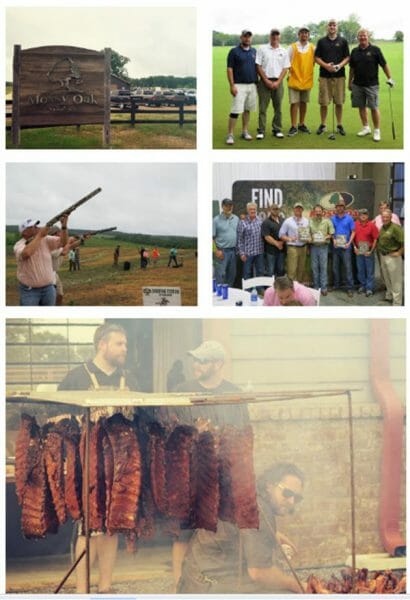 The golfing portion of the event takes place at the Mossy Oak Golf Club, the #3 Best New Course in the U.S. for 2017, according to Golf Digest. The sporting clays portion of the event takes place at the Orvis-endorsed Prairie Wildlife. At the end of the day, everyone will gather for the unique live-fire dinner and live/silent auctions, presented by Renasant Bank, at Town Creek Pavilion. The dinner portion is prepared by some of the nation’s leading chefs and live entertainment will be provided by Nashville songwriters.

“The Mossy Oak enterprise lives by the belief that the good we do lives long after we are gone,” said Chris Hawley, CEO/President and Co-founder of Mossy Oak Properties.

“We could not be more pleased with how well our great sponsors like OPI and many others, along with volunteers and participants have come together to make such a large impact to benefit three great charities the way that they did last year. I am humbled and overwhelmed, to say the least, to see so much good come out of so many people to help some incredible organizations.”

There are a very wide variety of live and silent auction items available at the event. The following are just a few of the incredibly generous items being donated by the sponsors of the event:

This custom duck call crafted by mastercall maker Josh Raggio is a piece of hunting lore. The inspiration for the Mossy Oak brand was a large oak tree by the same name at Choctaw Bluff in south Alabama, where Mossy Oak creator Toxey Haas grew up hunting with his father, Fox. This collectors call is made with wood from that tree, by master call maker Josh Raggio.

Tickets are available for the dinner and auction. Ticket price for the general public is $100.00.  To reserve a ticket, contact David Hawley at dhawley@mossyoakproperties.com.