INTRODUCTION: – -(AmmoLand.com)- Gun Facts is a free e-book that debunks common myths about gun control. It is intended as a reference guide for journalists, activists, politicians, and other people interested in restoring honesty to the debate about guns, crime, and the 2nd Amendment. 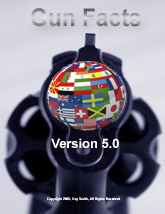 Each chapter lists common gun control myths, then lists a number of documented and cited facts (with over 480 detailed footnotes) that directly dispute the gun control claim. Thus when a neighbor, editor or politician repeats some slogan propagated by the gun control industry, you can quickly find that myth then rebuke with real information.

Visit Gunfacts.info to down load you own free copy. (scroll down on the home page)