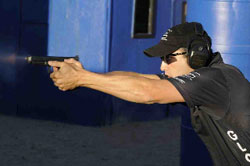 SEDRO-WOOLLEY, Washington – Dave Sevigny, an employee of Smyrna-based gun maker Glock and captain of the company's shooting team, picked up his fifth major title of the season by winning the Production division at the United States Practical Shooting Association's Area 2 Regional Championships.

Competing with a Glock model 34 in 9mm, Sevigny dominated the field by winning eight of the 11 stages and leading the match from the start. He finished with a final score of 1467.2847 match points, outpacing second place shooter, Nils Jonasson of Mesa, Ariz., by over 144 points.

“Dave just keeps racking up title wins and is one of the most formidable competitors in the shooting sports as this latest win, his fifth major victory of the year, proves,” said Chris Endersby, USPSA's Area 2 Director.

About USPSA: The United States Practical Shooting Association is a non-profit membership association and the governing body for the sport of Practical Shooting in America. USPSA has over 17,000 members and more than 350 affiliated clubs which host weekly matches throughout the country providing recreational shooters with the opportunity to test and refine their shooting skills in a safe, competitive environment. USPSA is also the US Region of the International Practical Shooting Confederation (IPSC), which is comprised of approximately 67 nations. For more information, visit www.uspsa.org .