The First And Second Amendments To The Constitution Are Converging At Don Davis' New Home Near Greenwood Indiana.
It's better to own a gun and not need it than to need a gun and not own it. – Don Davis 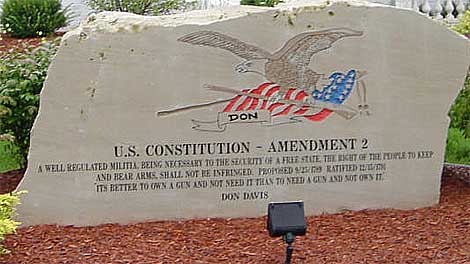 Donsguns.com – -(AmmoLand.com)-
Davis, the well-known gun dealer who tells TV viewers, “I don't want to make any money, folks, I just love to sell guns,” recently built a home in White River Township. He placed an ornamental rock in the front yard of the house on Eagle Trace Drive.

Inscribed in the rock is an eagle, the U.S. flag and the Second Amendment. One of Davis' notable sayings also is inscribed: “It's better to own a gun and not need it than to need a gun and not own it.”

John Nystrom, president of the Highland Park neighborhood association, said the association's answering machine has been filled with protests about the rock, which at 8 feet long and 3 feet high is larger than many cemetery monuments. “The rock is not going over very well,” Nystrom said. He said he hasn't received so many protests since Wal-Mart tried to build a store at Olive Branch Road and Ind. 135 earlier this year. Nystrom said the association would ask Davis to remove the rock.

Davis won't budge. “The only way I am going to remove that rock is if one of our fine judges protecting the Constitution tells me to,” he said Friday.

“I respect their right to object, and they should respect my right to display my rock,” said Davis, who moved into the house Thursday. Davis contends his immediate neighbors have not complained. “I've not heard one negative comment about it,” Davis said. “Every time I'm out there, people stop and comment about how much they like it.”

One neighbor, William Adams, said he had no problems with the rock. “I don't think anyone close does. He's a little flamboyant, but he's a nice guy.” Davis said one man knocked on his door and asked him to pose for a photograph by the rock.

Davis said he strove for good taste in designing the rock. The inscription was done by Riverside Stone in Mooresville. “It is beautiful and not any different than someone supporting Purdue or IU with their flags and banners,” Davis said. “My next-door neighbor has a Purdue flag flying under the American flag. It isn't any different.”

Nystrom maintains that the rock violates neighborhood covenants, but he did not specify the language in question. “We hope it will be removed in days,” he added.

Davis plans to fight back. “As soon as someone tries to get me to remove my rock, I'll have my lawyers examine every covenant to see if everyone is obeying all of them and if the association is enforcing those, too,” he said.

– Article written by Paul Bird of the Indianapolis Star