U.S.A. –-(Ammoland.com)- Your AR-15 is a ton of fun at close range. Punching holes in cardboard, demolishing milk jugs, pure semi-automatic joy as fast as you can take aim and pull the trigger. But you get no respect from the precision bolt-action rifle shooter at the range who says, “you can’t hunt with that thing anyway,” or “you can’t hit a barn door at 700 yards.” He throws you a smug look before settling in behind the wood stock of his prized bolt-action. When he fires, there’s a pause of silence, then “tink” as you hear the steel ring from THAT gong. The one you never even try to hit with your AR-15, the one that’s 1,000 yards away.

But, what if your AR-15 was capable of a one-shot takedown of game animals all the way up to the biggest mule deer in North America? What if your AR-15 could shoot in semi-automatic with sub-MOA accuracy to 1,000 yards and beyond? In 2018, you can! That precision bolt-action shooter is going to be annoyed when you’re ringing that 1,000-yard gong with your AR-15 three times faster than he can. But how?

6.5 Grendel – a Hunting Cartridge that Surprises Everyone

In 2004 Alexander Arms released the 6.5 Grendel, developed by putting a 6.5mm bullet into a necked down 7.62×39 casing. The 6.5 Grendel was designed for hunters to use on deer-sized animals out to 300-400 yards, beyond the effective range of any .223 Remington hunting ammo. The effectiveness at hunting was quickly overshadowed by Grendel’s surprising accuracy. Excellent sub-MOA (less than 1” spread at 100 yards) groups are easily obtainable. With the right barrel length and bullet combination, 6.5 Grendel is capable of supersonic flight past 1,200 yards.

.224 Valkyrie is the hot new caliber everyone is talking about. Federal Premium Ammunition released the Valkyrie in 2017, derived from a 6.8 SPC casing necked down to accept .224 caliber bullets. Valkyrie utilizes a smaller, lighter bullet than 6.5 Grendel, and it’s shape takes advantage of everything learned about bullet design in the 14 years since Grendel was released. Federal developed a new round that is twice as aerodynamically efficient as the 5.56 NATO round. The .224 Valkyrie boasts supersonic flight beyond 1,300 yards with less wind drift and drop than comparable rounds at the 1,000-yard milestone.

The Primary Arms Battle E-mail Series takes you through side-by-side comparisons to help you choose which round is best for you. As we compare the two we have chosen several categories that will assist you on your buying decision.

Bullets lose all chance of accuracy when they slow from supersonic to subsonic speed. The 6.5 Grendel and the .224 Valkyrie were designed to extend the range of the AR-15 beyond 1,000 yards. They each take a very different approach. The Grendel uses a heavier, longer, and fatter bullet measuring .264” in diameter that maintains supersonic flight past 1,200 yards. The Valkyrie uses a .224” diameter bullet that is longer and heavier than the .223 and stays supersonic past 1,300 yards.

Reading ballistics data isn’t for everyone, so we will keep it short and simple (ample data exists on each round and can be easily searched). Our discussion on the ballistics of the two rounds starts with their Ballistic Coefficient (BC). In layman’s terms, BC is a number that measures a bullet’s aerodynamics; for comparison purposes bigger numbers are better. Beyond BC, wind drift, bullet drop and terminal energy are all important factors in determining which is the better round. 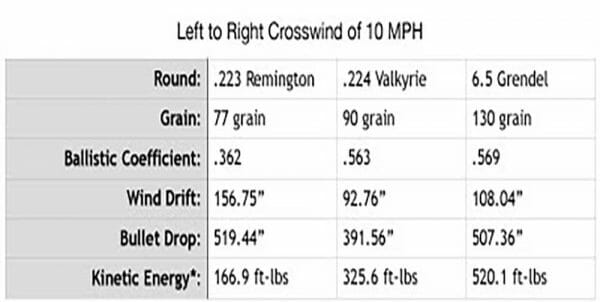 * based on independent calculations

Long range ballistics are the Valkyrie’s song. With similar BC and outperforming 6.5 Grendel on wind drift and bullet drop, .224 Valkyrie takes a slight edge here. It’s easy to see, however, that both calibers leave even the best .223 Remington match grade bullets lagging. While the .224 Valkyrie appears to be more accurate based upon the ballistics chart, the success is countered by the heavier 6.5 Grendel’s delivery of nearly 40% more ft-lbs of energy at that distance. Which caliber is best for you will be determined by your use and ultimate requirements.

If you want to hunt larger animals such as deer or mountain goats, 6.5 Grendel is for you. Make no mistake, 6.5 Grendel packs a wallop. At 300 yards it has more than double the kinetic energy of a .30-30 cartridge, and almost 4x the energy of a 75 grain .223 Remington hunting load. Because the bullet weighs so much more, Grendel doesn’t rely on velocity for its terminal effect on animals, so you don’t lose much effectiveness by choosing a 16” or 18” barrel. Grendel makes for a lightweight, handy hunting rifle that can be carried all day long and fired standing or from a hasty supported position. Valkyrie runs into a problem Grendel doesn’t have: many states have laws banning hunting medium to large game with .22 caliber cartridges of any kind, with no exceptions.

Almost all .224 Valkyrie barrels are 22-24” long to maximize velocity. Due to its smaller bore shooting a lighter bullet, .224 Valkyrie rifles exhibit much less recoil than 6.5 Grendel—up to half as much, depending on the loading. It’s no wonder that prairie dog hunters are anxious to try Valkyrie. 6.5 Grendel responds to the challenge by demonstrating its flexibility, with dedicated varmint loads available. Federal’s example features a 90 grain boat-tail hollow point bullet screaming out of the barrel at 3000 fps muzzle velocity. 6.5 Grendel is right at home when hunting hogs or coyotes.

What if you aren’t hunting and you just want to ring that gong at 1,000 yards? Both calibers will get you there. Many shooters regularly take 6.5 Grendel to 1,000 successfully. However, .224 Valkyrie exhibits generally less bullet drop and wind drift than 6.5 Grendel, recoils less, and doesn’t cost more to set up or to shoot. It may not have much kinetic energy to spare at 1,000 yards, but Valkyrie flies better than any other cartridge developed for the AR-15.

With a 14-year head start on the market, there are more offerings of Grendel parts across a wider range of prices and configurations; .224 Valkyrie has a lot of catching up to do. At a minimum, both the Grendel and Valkyrie require a different bolt, barrel, and magazine when compared to a standard 5.56 NATO AR-15. Most enthusiasts choose to buy or assemble a dedicated complete upper in one caliber for easy interchangeability with their favorite AR-15 lower.

Safety Note: Choosing 6.5 Grendel comes with an added complication. There are “Type I” and “Type II” bolt/barrel specifications out there, and you CAN NOT mix and match parts for each of them without risk of damage and/or injury. Type II is by far the most popular configuration, but pay attention to what you are buying! A Type I bolt won’t chamber rounds in a Type II barrel at all. Even worse, a Type II bolt mated to a Type I barrel will create excessive headspace and result in a rifle that is dangerous to fire.

Surprisingly, when it comes to match grade ammunition, the brand new .224 Valkyrie is not measurably more expensive than 6.5 Grendel. Match grade ammo prices for either caliber are pretty comparable to .308 Winchester. The bottom line is that quality match-grade ammo is more expensive than mil-spec or surplus 5.56 NATO, no matter which path you take. Expect to pay somewhere between $1.15 and $1.25 per shot for the good stuff. Range grade and plinking ammunition exists for both calibers at about $0.50 per shot.

A larger, heavier bullet, or a smaller, faster bullet? Those who prefer a proven system, want to hunt medium to large game, or demand a short, handy rifle will find a trusty friend in 6.5 Grendel. Shooters who like to shoot at long range targets, enjoy varmint hunting with a low recoiling rifle, and plan to shoot exclusively from supported positions should give .224 Valkyrie serious consideration. Let your own priorities be your guide—we’ll see you out on the range. 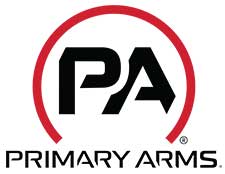 Ten years in the making, in 2017 Primary Arms expanded operations into an all-new 50,000+ sq. ft. facility located in Houston, Texas. Primary Arms continues to grow by bringing customers quality products, fast shipping, competitive pricing and world-class customer service. For more information on Primary Arms, visit their website, find them on Facebook, or follow them on Twitter.