U.S.A. –-(AmmoLand.com)-— A United States District  Court for the District of Colorado has issued a Temporary Restraining Order (TRO) against the Town of Superior to prevent enforcement of their recent “assault weapon” and magazine ban, based on the Supreme Court ruling in NYSR&PA v. Bruen.  This appears to be the first of many pending cases likely to knock down laws which infringe on the exercise of Second Amendment rights under the Bruen decision.

Superior, Colorado, is a town of about 13 thousand located on highway 36 between Denver and Boulder, Colorado. The outskirts of Boulder are about three miles northwest, beyond the outskirts of Superior. Superior appears to be a trendy, upscale bedroom community serving Boulder and Denver. The average home price is said to be $570k.

Judge Moore was appointed by President Obama in 2013 unanimously. The judge took the challenge by the Plaintiffs (the Rocky Mountain Gun Owners, National Association for Gun Rights, and Charles Bradly Walker) to apply to three provisions of the ordinance enacted by the Town of Superior, sections 10-9-40, 10-9-240, and 10-9-260.

From the Court TRO: 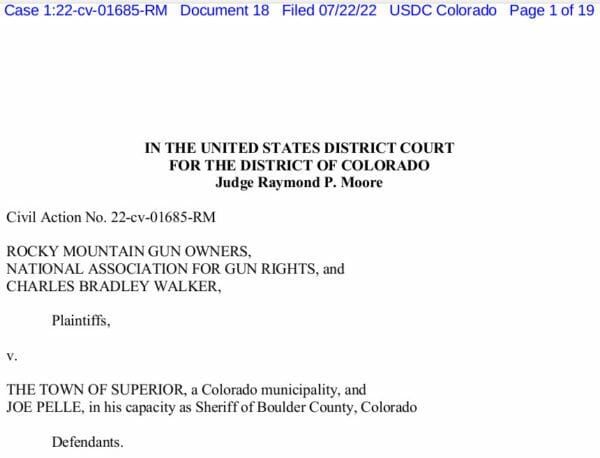 The ordinance contains a laundry list of leftist talking points and dubious statistical arguments put forward by opponents of the Second Amendment.

They are, essentially, policy balancing arguments ruled inapplicable to the Second Amendment by the Constitution, specifically in the Bruen decision.  Bruen states the policy balancing arguments were decided by the people at the time the Second Amendment was adopted. Judge Moore, instead, uses the historical and cultural approach demanded by Bruen. From the TRO:

The Court is sympathetic to the Town’s stated reasoning. However, the Court is unaware of historical precedent that would permit a governmental entity to entirely ban a type of weapon that is commonly used by law-abiding citizens for lawful purposes, whether in an individual’s home or in public.

The Court also notes that the Town’s justifications are somewhat undermined by the other subsections of this very provision. Specifically, subsection (b)(1) provides that “[a]ny person holding a valid federal firearms license from possession of any firearm authorized pursuant to such license” will not be subject to the prohibition of 10-9-40. The following subsection, (b)(2) likewise exempts any “firearm for which the U.S. Government has issued a stamp or permit pursuant to the National Firearms Act.” The National Firearms Act, referenced in the latter subsection, provides for permitting such firearms as short-barreled shotguns and rifles, machineguns, and silencers. Each of those weapons is arguably even more deadly than the semi-automatic weapons that the Town of Superior seeks to ban, yet these provisions would permit individuals to possess, sell, or otherwise transfer them.

In section 10-90-240, the town requires a certificate for possession of already owned weapons and restrictions on the carry and use of such weapons. The Court issued a TRO against this provision as well:

As previously discussed, the Court concludes that the Second Amendment encompasses the conduct addressed by this provision. And, also as previously discussed, the Court is unaware of a historical precedent that would permit the Town of Superior to impose such a regulation that would, in reality, eventually ban all assault weapons. Therefore, despite the Town of Superior’s substantial and legitimate concerns, the Court concludes that Plaintiffs are likely to prevail on the merits of their claim as to this provision.

The Court refused to issue a TRO against the part of the ordinance which prohibits the open carry of firearms.  In part, the court reasoned the bearing of arms is not banned if the person has a concealed carry permit.  The court did not address the problems with banning open carry of arms that are difficult to conceal, such as rifles and shotguns, nor did it discuss the large number of places where the town bans any carry of firearms.

There are exceptions for firearms made before 1968, but none for homemade firearms.

This TRO is a good start to rescinding the multitudes of laws infringing on Second Amendment rights which are enforced in scattered jurisdictions covered by the United States Constitution.